Not a Historical Fiction - Higher Glyphs

So I just realized that I have not yet shared with you the semi-finalists and winning stories. I'm terribly sorry. I had life overwhelm me, and, coupled with Indie e-Con burn-out, I shut down.

Anywho, I'm getting back on top of things (and will be emailing all of the winners shortly, finally), so let's plunge in.

First off, we have the semi-finalist-by-default Higher Glyphs, which was not a Historical Fiction, but rather sci-fi. It was written by my mother, at the last minute, when she found out that I didn't have any submissions for this prompt. And then she sent me an edited document a few days later with a few edits. The first submission was the one judged, but this is the edited version.

I hope you enjoy! 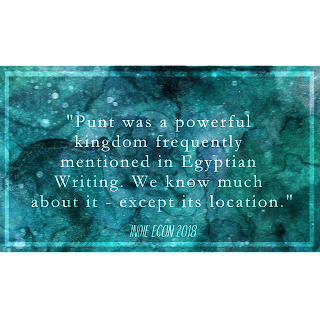 Higher Glyphs
Gabby gazed out into the desert, her eyes fixed on one of the “Great Wonders of the Ancient World” as the tourist guide droned on and on about them.   This man was said to know a great deal about these “Pyramids of Egypt”.   She chuckled, he knew nothing.  It had been her people who had built that first pyramid, built and brought it to Egypt.
She glanced back down at the brochure describing the ancient burial chambers.  She shuddered.  How soon these people had forgotten the real reason for the pyramid.   Imagine housing dead people with their organs removed.  She chuckled.   She could hardly wait to see the look of disgust on the faces of her superior who had given her the task of ship retrieval.   She wondered how they would explain a missing pyramid.
The time table was getting short.  After a year of work, they were now only days away from lift off.   She thought back to the day she had been selected as team leader.   It was a day of honor, until she understood that she would be allowed no farewells.
…………………………
Skylort beckoned from the corridor, the motion slight but urgent none-the-less.   She gave her excuses to her friends and rubbed her cheek against her mate’s.    “I saw him too,” he murmured, “He went toward the blue exit.”  He winked before turning his attention back to the card game.   Gabby strolled out of the cafeteria and down the walkway.
Skylort was up to something.  As a tech expert at the Nebrura Institute of Higher Learning, he was obsessed with the races that they had visited the last time their planet had wandered through these galaxies.   “You were quick to observe.  That will serve you well,”  said Skylort as she caught up to him.  She nodded and waited patiently.   “You will come to a meeting tonight.  After the bells.”   And then he vanished.   She wasn’t surprised.   Nor was she surprised when her mate appeared soon after.  Space jumping was a gift many of her people possessed.   Her gifts were more rare, and included a perfect memory and the ability to learn new languages almost instantly, but alas, not space jumping.
That night, she had arrived unprepared for the task that was laid out before her.  Eleven others sat in the room.   “Some of you know each other.  You can figure it all out after you leave tonight.”   They nodded, glancing back and forth.   “Tonight, you will learn the purpose for which I have shown interest in your minor selves.   Each of you shows promise and should, working together, be able to retrieve a minor item that I have been researching.”
Skylort cleared his throat and an elder entered the room.  In his hands was a very old book.  “My father.”   Skylort explained.   “His father was a boy the last time we were here, and his father oversaw a secret mission to a special planet.    The mission may have failed, or it may have succeeded.  We do not know.   Those tasked with the plans were abandoned to their fate due to the arrival of a great judgment.”
One brave arm rose, “Sir, you don’t mean the great Anglec Wars and the planet Ert?”
“Oh yes, I do mean.  I’m surprised you know anything about it.”
“My great grandfather …. He was an abandoned.    His mate had been left here with their children.  My grandmother had already passed the age of understanding.  I would not have said anything, except for that book.  She also has one.”
Skylort stared at the young man intently.  “Yes, there were a few missed, so was my father.”  He cleared his throat and continued.
“Secretly, I have been researching.  The purpose of achieving the status that I enjoy today, was to have access to the secret documents.   But handed down to me, was my Grandfather’s Wordthoughts,” he motioned to the book his father held.   “I read it.  I mean to prove it happened, and to retrieve the great ship that was sent to Ert.”
The room was silent.
“When do we leave?”
“Were you not listening?  You leave tonight.”  You could have heard a pin falling.
The rest of the night passed in a blur.   So many instructions.    So much secrecy.   It would be almost 3 full turns before they would return, hopefully in triumph.    The hard part was not being able to say any farewells.   Skylort assured them that as of this moment, they had no choice, and he would personally contact their families.   He was startled to learn that Gabby had a mate, but assured her that he would be informed as well.   But informed of what?   She wondered.   She was not worried, for one of her mate’s gifts was a heart link.   He would always know where she was and that she was alive, but did it work across space that vast?

After a long trip, their arrival on Ert had been equally shocking.   Where were the lush acres of endless trees and animals?   Where were the giant creatures?   This was a broken and dying world.   Contact would be out of the question, the mission must have failed – their sole purpose was now retrieval of the great colony ship.    The language in their data existed in a mere tiny number of the populace and was greatly changed.  Where had all of these new languages come from?
It took a week to locate their directive.   They would land in a place called Egypt to research and plan.   Gabby’s language skills were tested and challenged as she encountered a dozen languages that must be understood and taught before they could move out into the population.

Indeed, their home arrival was with the biggest pomp and ceremony.   Awards were handed out.  Skylort became a hero and awarded much prestige for his part.  The rescued cousins were given the finest homes and care, their bodies responded to the perfect air and food and they looked forward to long lives.
Gabby only had eyes for her mate as she slipped from the crowds to greet him.  “Welcome home!”  He cried.  “My heart has been singing the heartsong the whole trip that you have been coming home.  When you turned it on, we, the whole planet, knew you were coming home!”