May 25, 2018
Utopias. The perfect society. Are they even possible? I think the only one that I can call to mind that was functional, yet interesting would be Dinotopia, and I actually have written one. My second NaNo, Infiltration. The book is currently sitting in my documents waiting for a rewrite. That thing needs work.

Anywho, we have Emily Mundell here to discuss utopias. Emily's debut, The Sorceress and the Squid is a fantasy (and really good,) but she tells me that she has some sci-fi coming soon, so stay tuned! 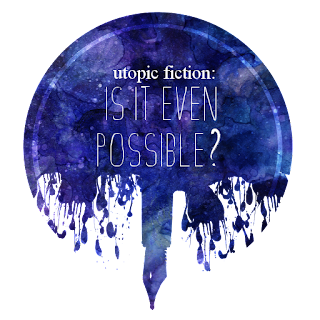 What makes utopian fiction? Is there even any such thing? Today we are going to tackle this interesting topic and I must admit, my brain has gone into overdrive trying to decipher the paradox before me.

Before we get into it, let's take a look at the dictionary definition of "Utopia."

Now, by very definition we can argue that utopias as a genre can't really exist. Of course we can imagine our own perfect world, a paradise where everything is pleasant, easy, communal, peaceful, etc. BUT can that really work for fiction? And, more importantly, has it really worked for fiction? Let's take a look at some examples...

Note: These are all books categorized as "utopian fiction" when I looked them up.


Utopia is a work of fiction and socio-political satire by Thomas More published in 1516 in Latin. The book is a frame narrative primarily depicting a fictional island society and its religious, social and political customs.

While this novel depicts a society that seems good and healthy on the outside, it is easy to see looking into it that there are some potentially hazardous aspects. Controversial (often outright morally corrupt) subjects are encouraged there, slavery, euthanasia, post-modernism, the ease of divorce, etc. The island is run with communistic principles which can appear good and prosperous, but very often morph into something dark, controlling, and dangerous. In order to keep things peaceful, safe, and fair, the islanders have very little freedom or privacy. There is not much individualism at all and punishment is strict for those that go outside the boundaries of the island's rules. While everyone does have a pleasant, relatively easy and safe existence, there is little choice or opportunity in it, which for some may be very far from what they would consider ideal or "utopian."

THE GIVER by Lois Lowry


Twelve-year-old Jonas lives in a seemingly ideal world. Not until he is given his life assignment as the Receiver does he begin to understand the dark secrets behind this fragile community.

Many people classify The Giver as a utopian novel, mainly for the perfect world that the main character, Jonas, occupies. However, the aim of the books is to dismantle this view, and show just how shallow and far from paradise this community of "sameness" really is. Everyone is healthy, safe, and happy. But at what cost?


Brave New World is a dystopian novel by English author Aldous Huxley. Published in 1932, it propounds that economic chaos and unemployment will cause a radical reaction in the form of an international scientific empire that manufactures its citizens in the laboratory on a eugenic basis, without the need for human intercourse.
Set in a future London, it follows the fortunes of the illegitimate son of a senior governor, who has grown up in America, outside the new empire, and who experiences a dramatic culture-clash when he has to live under its rules. The novel anticipates developments in reproductive technology, sleep-learning, psychological manipulation, and classical conditioning.

Island is the final book by English writer Aldous Huxley, published in 1962. It is the account of Will Farnaby, a cynical journalist who is shipwrecked on the fictional island of Pala.

Aldous Huxley is a fascinating writer who explores very dark and very relevant subject matter. These two books have similar themes in which the people of the two very different societies, having everything, become passive and pacifist. One group easily distracted and having no moral compass or passion, the other not having something to stand for. In both situations, the audience does not find paradise awaiting them at the book's end, but tragedy.


Inherently, utopia is a matter of preference/opinion and what the individual believes to be an ideal society. That may not be the same for everyone. While many may see the loss of individualism, the advance of machines and technology, the use of mentally uplifting drugs, euthanasia, population control, or fixed roles to keep everything running smoothly as actions towards "the greater good of mankind" there are many who would not be willing to forsake freedom for even that good cause. Even with advanced technology and scientific discovery, equality for all, and no poverty or pain, can we as people truly be satisfied when our personal choices have been taken from us? Perhaps this is the question we must seek to answer when writing utopian works of our own.

There is also a reason utopias are acknowledged only as works of fiction. The idea of true utopia is impossible. The real world is far from perfect and we cannot imagine true perfection, peace, and happiness, which is often why books that originally begin as utopias are eventually revealed to have been dystopias in disguise. A truly perfect world realized on this earth is not only impossible, but impractical. After all, if everything was perfect and good, where would the conflict come from? A writer would have a difficult time trying to pen a story about good, happy things happening to good, happy people and still manage to keep the attention of his audience.

As a Christian, I believe the Earth was created to be a paradise, a heaven on earth where many of the utopian ideals that we can only imagine were able to take place. However, because of our current fallen state and the fallen world we now live in, I don't believe utopia is possible. Mankind is too depraved, too selfish, and too cruel to create a truly "perfect" society.

But does that mean that Utopian fiction as a genre cannot exist? I don't think so, although the answer is a bit complicated. Each book I listed above has the guise of a world that operates as a utopia, even if it is incredibly foul underneath - actually dystopian even. Perhaps the answer is that utopian and dystopian fiction are two sides of the same coin, and that not only is it possible for utopian fiction to exist, but it is, in fact, a very precise and sharp picture of reality and how often things that seem good on the surface are really rotten and foul underneath.

If you are planning on writing a utopian or dystopian work of fiction, I challenge you to consider and implement the concepts we've discussed today. While a utopian book make not exist in the way we may initially imagine, there are many, many ways to tell a truly provocative and thoughtful story through the twisted web that is utopian fiction, whether your society is truly paradise or only pretends to be.
Christian Writing Emily Mundell Genre: Sci-Fi Indie e-Con