Building a Universe with Rachel Rossano

May 25, 2018
*rubs hands eagerly* Worldbulding is my favorite thing - and it's especially fun in science fiction. Fun, and intimidating ... since it involves extrapolating upon the possible yet still remaining within the realm of amazing.

Rachel Rossano is here to talk about this monumental task. Her sci-fi Exchange is a short little thing. I read it a couple years ago in my Great Sci-Fi Consumption and was seriously impressed with the little glimpse that she gave to the world (telepathy is just my favorite, okay?). I wish we were in the future just so that more of these series could be on my bookshelf right now where I can read them.

Anywho, over to her! 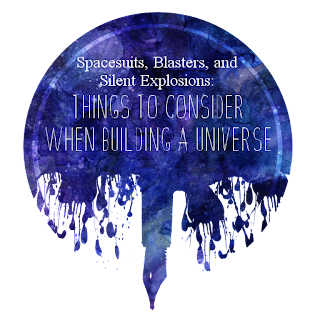 A couple of years ago (well, maybe seven or so), I decided to take a dive into writing science fiction. I was armed with a decade of fantasy-writing experience, a long-running love of televised science fiction (Star Trek, Stargate, Star Wars, Farscape, and Andromeda), and the obsessive consumption of about a third of our library’s adult science fiction section in one summer as a teen. Surely this couldn’t be too hard, right?

I laugh now because it’s either that or lose my mind. Don’t worry, I will cope. My husband, who has been a faithful supporter of all of my writing from day one, has fallen in love with my first science fiction ideas. As he builds great dreams of epic series of galactic drama, I am still struggling with the messy details of executing them with skill. Don’t get me wrong. I am fully committed and in love with my rough, broken world and the growing cast of characters living within it. We are hooked in for the long jump on this literary star cruiser. However, here are some pointers on things you should consider before launching your own epic science fiction saga.

Characters
I am a character writer and reader. Most of my books are character-driven. Male and female are no longer the only options. Human, alien, android, disembodied artificial intelligence, or some other variety of being, the options are much more open. Even if you go human only, you can add modifications. Longevity, super strength, heightened intelligence, telepathy, telekinesis, or even some other enhancements come to mind. As you dream, though, do keep in mind that each of these new options needs to have costs, constraints, and consequences. Limitations will make the story all the more interesting and gives the characters inner-struggles to overcome.

Civilizations
Next to consider is a combination of setting and history for each of your characters. Where did they come from? What happened to bring about their existence? As much as science fiction is about looking into the future, it is also interpreting the past. What will the future look like and how did it get there? Retro, beat up, and dirty like Star Wars can give your world a rough and realistic feel. A Star Trek-esque gloss to an optimistic future gives readers hope, at least until the corruption finally is revealed. Or you can go pessimistic. Humanity fighting for their lives against an alien force, extinction, self-annihilation, or just trying to breathe one last time in the cold vacuum of space. Another route is exploring the raw and dangerous adventure of colonizing the stars. Also, exploring alien landscapes and their strange cultures and traditions. The opportunities are endless.

Planets
Now that the hero and his companions have been developed, their back stories, cultural heritages, and mutual or separate histories created, it is time for settings. Pick your planet. Is it Earth, a colony in some distant star’s Goldilocks zone? You could also have some distant ancestors terraform a barren planet. How many suns do you want it to have? How many moons? Rings?

It is important for all of these to debate the storytelling values of hostile biomes, semi-hostile biomes, or welcoming biomes. In a hostile biome, your characters will be playing out their dramas within structures that will protect them from the elements of the planet or cold space. Semi-hostile biomes might be possibly made less uncomfortable with gene-therapy, injections, medications, or some other adjustments to make them livable. Being claustrophobic, I personally prefer more hospitable climes, but the opposite definitely offers more dramatic opportunity.

Solar Systems
Now that you have your planet’s atmosphere, weather, and physical features, it’s time to pick the neighborhood. There are a few choices out there. A little bit of research should turn up some real possibilities. Scientists are discovering new planets every day and hypothesizing about their conditions. Another option is to explore the farthest-most reaches of the universe and just pick one. Or you can throw all caution to the solar wind and completely make it all up. I would just recommend doing some research to make sure you don’t make any really obvious mistakes like making all the planets perfectly habitable and circle them around the same star.

Galaxy
Answers to the previous questions will constrain the answer to this one, but one thing I would highly recommend considering is the size of just our galaxy. It is huge! Which means long periods of travel time. Even if you have superior technology that facilitates almost instantaneous travel over great distances, keep in mind the distance just across the Milky Way is about 1,000,000,000,000,000,000 km (about 100,000 light years or about 30 kpc) across (according to NASA). Traveling between galaxies is even farther. The universe is big.

Space Travel
These astronomical distances bring us to our next question. How are our characters going to traverse them? Now, an author can choose to avoid this question by not having their world have working space travel. As far as I have found, there is no rule that your characters must traverse the stars. Still, it is a prospect worth consideration. Should they do so, by what mode will they endeavor it? Here are a few possibilities for your consideration. Cryo-sleep offers the hypothetical possibility of going to sleep for those 100,000 light years across the galaxy. Of course, that’s if the power source for the equipment doesn’t malfunction, the ship doesn’t encounter an unforeseen issue way out in space, or any of the many other issues that might crop up during unmanned flight. Traveling at near light speed offers some interesting plot possibilities thanks to the theory of relativity. Orson Scott Card uses those to his advantage in his Speaker of the Dead series. Of course, there the possibility of some kind of warp or hyper-speed or alternative, but keeping things realistic will require some work. I recommend you also check out solar wings, gates, wormholes (artificial or permanent), and teleportation.

Technology
A final aspect that would be wise to consider at least a bit before you begin writing and plotting is the technology of your worlds and cultures. From robots to medicine, communication to policing, money to food, it all plays a part in building the realism and tactile backdrop of your story. Some of the elements can be simple, androids that serve meals and clean, or very complex with compound consequences. Some of these aspects will probably be developed mid-writing stage, but having at least a few of them prepared will help the process along.

If you started reading this article thinking about an idea for a new science fiction adventure, I hope it has helped you develop your idea more. I would love to hear about it in the comments. If it hasn’t and you spent most of the article counting off the things I missed, I would love to hear about it too. This has barely scratched the surface of the limitless possibilities. That is the beauty of science fiction. A great big beautiful universe stretches out there, waiting to be explored without even leaving your couch. Who could pass up an opportunity like that?
Genre: Sci-Fi Indie e-Con Preparing to Write Rachel Rossano