May 25, 2018
Superheroes are fascinating. Popular, too. Someday, I'm going to finish writing my superhero dystopia trilogy.

But, for now, I have C.B. Cook here with us, author of the insanely fun superhero novel Twinepathy, whose sequel, Lightporter is coming out in the soonishly! In fact, she's got a blog tour all set up and everything and is looking for more people to help spread the word (so if you'll just kindly pop over there and take care of that, I'll wait...) 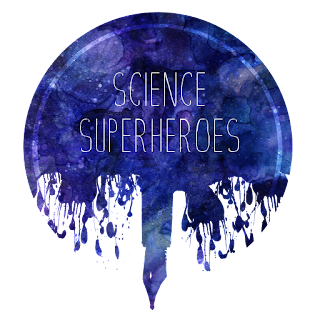 As both a writer and a reader, superheroes fascinate me. And while I don’t mind the occasional superpowers from a magic or fantasy-type source, I think it’s really interesting when superheroes’ powers come from science. There’s something about the logic behind superpowers created by science that makes them seem almost possible, even though they aren’t.

In most superhero stories, people receive powers through one of two ways: they’re usually born with powers, they use technology, or they gain powers through some kind of experimentation. Take the Avengers, for example. Captain America and the Hulk gained their powers through experimentation, Iron Man uses technology for his suit (although you could also argue that his intelligence is his superpower), and Thor was technically born with his powers. They’re all definitely superheroes, but they gain their powers in different ways. However, in this post, I want to focus on the logic behind superpowers, specifically those created by science. And as much as I love Marvel, I thought I would focus on a different hero: The Flash.

To start off with a disclaimer, I am 100% not an expert on anything relating to the comics, and I decided to focus on the Arrowverse Flash, from the TV show, since he’s had about four seasons to have his powers developed onscreen. For those who don’t know, Barry Allen, aka The Flash, is a superhero who gets the power of superspeed when a particle accelerator explodes and he’s struck by lightning in the storm caused by it. That explosion, or technically the dark matter created by it, is how all of the other “metahumans” in his universe get their powers, for the most part. However, not everyone caught in the explosion gets powers, and this is because only some people develop the “meta gene.” Complicated, right? Basically, this is the scientific explanation for the presence of superpowers in an otherwise normal universe, and it helps suspend the viewers’ disbelief. Now don’t get me wrong, the reasoning doesn’t have to be this complicated, but there still has to be a reason or some kind of logic as to why a superhero has powers.

Not only do science-based superheroes have to have a logic for how they became superheroes, their powers have to work logically as well. Now this isn’t always true, and a lot of time writers can get away with leaving out logic, but logic helps a lot with suspension of disbelief. In the case of The Flash, lots of running means he’s also burning lots of calories. This means he has to eat a lot to keep up with his extra-fast metabolism. It’s little details like these that can really flesh out a superpowered character and bring them to life in our minds.

Plus, for all the writers reading this, using logic with superpowers can also provide plotline ideas. Maybe, like with the Flash, a character with superspeed heals quicker, too. If you use logic to explore the limits of your character’s powers, you might be able to discover new ways they could use those powers. For example, when I was picking superpowers for some of my own characters, I thought about using a character who could manipulate light. Then I realized that it could be possible for him to travel at the speed of light, too, teleporting himself or other people. This really helped flesh out his character and gave me way more plot ideas. In this way, logic can be very helpful and can help you take an “boring” superpower and turn it into something interesting.

There’s so much more I could talk about—I could nerd out about superheroes all day—but I think I’ll leave it there. I’m so glad to have been able to share this post with you guys, and I hope it will be helpful to someone! Don’t forget to check out some of the other posts in the e-Con, and feel free to chat with me in the comments.
C.B. Cook Genre: Sci-Fi Indie e-Con Writing Advice